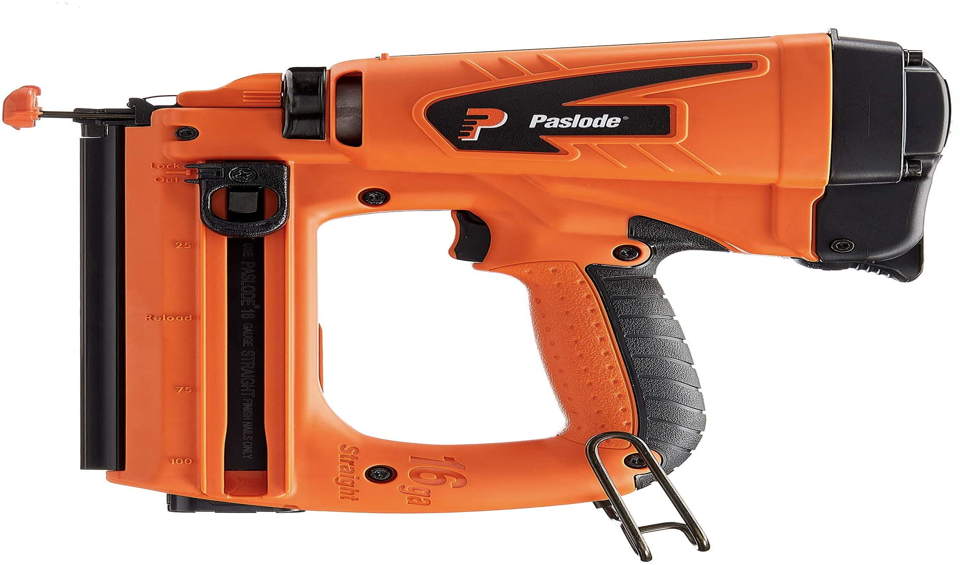 Read this Paslode nail gun repair manual before approaching a repair shop- it may help you save money.

Well, don’t panic..this article is all about paslode nailer troubleshooting and we will tackle the most common Paslode nailer brand problems plus their basic remedies.

The good news is that some of them are pretty simple to eliminate even if you’re not mechanically inclined.

Before we start, note that Paslode nailers need servicing occasionally.

Most importantly, you must clear out accumulated gunk and lube regularly for it operate smoothly (but for oil-free models).

Here now are the most common issues:

Manually pushing the firing pin back (for example, with an Allen key or a screwdriver) after each shot can be super annoying.

Otherwise, try the following if your Paslode nail gun driver blade is not returning…

Remove the gas can and battery.

Next push/depress the driver blade up into the gun(all the way) and test the gun.

Remember the nailer won’t fire if the nailer’s driver blade is stuck in that down position .

Here is what could be behind this:

Other times the opposite happens- your fan won’t shut off (until you take the battery out) and the nailer won’t fire either!

Now, this may point to defects in the spark unit (more on troubleshooting spark problems later) or circuit mold assembly.

The only way out here is to replace the offending part depending on the results of your tests (check your manual for instructions).

For misfires, the individual remedial actions are as follows:

Why does my nail gun shoot two nails?

Mostly, your Paslode nailer will fire two nails simultaneously either because the chamber the driver follows has issues or you’re shooting the wrong nail size.

The other thing that you can suspect in cases of double firing (Double Kiss) is some parts being a bit loose.

For instance, it’s likely to hit two fasteners at the same time if the nose is loose from the main handle assembly.

To get rid of the matter, load the manufacturer’s specified nails, tighten all the loose bolts, and lastly, inspect the driver/its channel if no change.

Why is my paslode nail gun not firing?

Paslode not firing? Well, from our experience, the most common cause of this issue is a jammed piston- a misfired or jammed nail may have stopped the nailer’s piston in a wrong location preventing air from building up in the chamber rightly.

Try to hold it up against a surface with the trigger pushed in and then insert the battery.

This might help trigger the firing mechanism to return the piston to the natural position.

Those using corded units can remedy the situation by connecting the air hose -the trigger should be pulled.

Air will rush into the chamber, pushing the piston back.

The gun won’t fire as well if the O-rings around its firing pin are broken or cracked (recall them?)- check if the o-rings are in perfect shape.

The first thing you need to know is that Paslode nailers typically stay permanently green if its set up properly and running smooth.

As such, your Paslode flashing green light could mean you need to fix something.

In general, it might be a fuel-related issue so begin by checking your nailer’s plastic carb head- ensure that it’s snapped tight into the fuel canister.

Next, check the fuel cell’s use by date.

Also make sure that the whole fuel setup is placed correctly.

If the light flashes red, the most common solution is to recharge the battery- the battery may have entered standby mode because you’ve not used the tool for a lengthy period of time.

Side note: If it still continues to flash even after charging the battery fully, it may point to corroded battery contacts (clean them then retry) or a dying battery (test it with a new battery). If no luck, it might be necessary to check the nailer’s spark unit (covered later).

Why is my paslode flashing red & green?

There are a couple of possibilities here with the battery being the most probable culprit- you already know what to do.

Others include trouble with the motor –this is an occasional cause too.

The other off chance is an electrical/electronic fault- perhaps there is a short somewhere in the wiring (a wire could be floating in there causing shorts).

Of course, it’s important to refer to your manual for the correct interpretation of your specific Paslode nail gun light signals before attempting any of the above suggestions.

Look at these possibilities if it won’t spark:

Most of the above guidelines apply for this model.

However, there are a couple of other problems you might encounter.

Here is what’s more you can try:

For the most part, most of the issues with Paslode nail guns are due to the following:

· Failure to Tune it up

Most Paslode nail guns should be cleaned and lubricated after a given nunber of shots (refer to your manual).

Do it more often if you often use it in a dirtier environment or you’re frequently using it for heavy work.

Use the recommended Tune-up Kit for your model for the best results.

In fact, most of the problems we have discussed here won’t go away without giving it a good cleaning oiling the whole unit.

· Gas cylinders (even if new)

If you’ve just installed a new gas cylinder and your nailer still won’t work, install another one and retry.

In addition, the gas cylinder must be installed correctly- your nailer may, for example, malfunction if the end going to the cylinder was not snapped on correctly/completely.

Some folks attempt to shoot different nails (other than what Paslode recommends).

Chances are, you’ll have tons of problems.

Likewise, you’ll be asking for trouble if you use non-compatible gas.

If after stripping and cleaning it you fail to re-hook the wires correctly because of doing it in a rush, it won’t work as well as you’re used to, if it at all works.

For example, forgetting to reseat the Oring appropriately for some models causes plenty of issues.

· Age and heavy use

Some Paslode parts break down with age and heavy work.

A good example is the wiring harness in certain nailers.

They could be moving, even if slightly, leading to poor contact.

Set them properly and clean the contacts.

While we have tried to make this Paslode nail gun repair manual as detailed as possible, you may find that the problem you’re facing has been exhaustively tackled in the manual of your particular Paslode nailer.

As such, your manual should be your first stop when troubleshooting any Paslode nail gun.

Don’t worry if you have long misplaced your manual- simply download it here.

The page has updated manuals for nearly all current Paslode models and even for some discontinued Paslode nail guns.

Blind nailing vs face nailing- which is the right technique?